A details man. That’s how Jeremy Hunt repeatedly described himself during the recent Tory leadership race. Hunt told the British public he was deeply focused on the small things that matter – the facts, figures and intricacies of politics. That was before he didn’t turn up to a crucial Brexit vote because he got ‘confused’ about whether he needed to attend. Perhaps a factor in his loss to Boris? But, before his spectacular no-show, Hunt was venturing down a well-trodden path of political and commercial rhetoric – repetition.

Everyone knows how annoying it is when a sibling or friend suddenly decides, parrot-like, to repeat everything you just said. That’s undeniably the bad side of repetition – along with eating the same lunch every day, the earworm refrains of crazy frog/baby shark and people saying ‘like’ every ten seconds.

But what if repetition isn’t as annoying as we think? And, deep down, we like it so much it makes us reach for our wallets and buy things we didn’t know we needed. Not only that. It even has the power to influence where we put that cross on polling day. Used with a bit of subtlety and finesse (or, in some cases, with no subtlety whatsoever – I’m talking to you, Donald!), repetition can be a potent marketing tool.

A sense of déjà vu

Repetition makes us feel safe. Our brains are always on the lookout for patterns so when we see the same information being repeated – words, phrases, names, logos or even people – our brain prioritises this and dismisses everything else as irrelevant. On top of that, research shows people tend to prefer things they are familiar with and which they see regularly. The more you see Jacob Rees-Mogg, the more you love him, right? 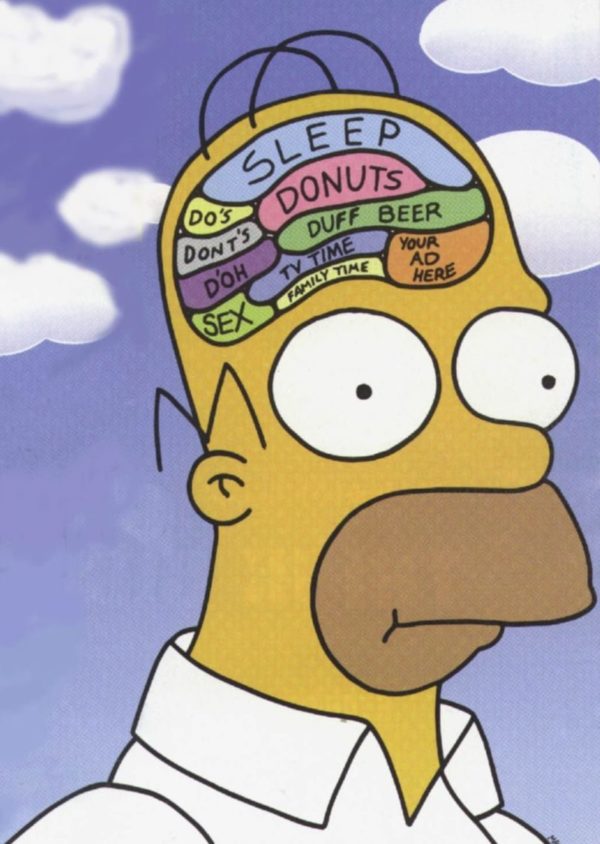 Apparently so. It turns out the more voters are exposed to a candidate, the more votes that candidate receives – regardless of the popularity of their policies. And when it comes to brands, consumer testing found that heavily promoted products are more positively rated by shoppers. The research published in the Journal of Advertising found that frequently repeating adverts signals to consumers that the product is higher quality, even more so than an expensive price tag.

Repetition across the board

There’s no doubt repetition and consistency play a part in building a strong brand. And there isn’t just one way to go about it. It’s not just repeating your advert on TV at every break during Love Island or sticking your posters in every frame of the tube escalators. It’s delivering a positioning and purpose time and time again. It’s sticking to a consistent tone of voice and presenting a clear visual identity across every touch point. Because when every element is repeated consistently, recognition and brand loyalty are built into people’s minds. 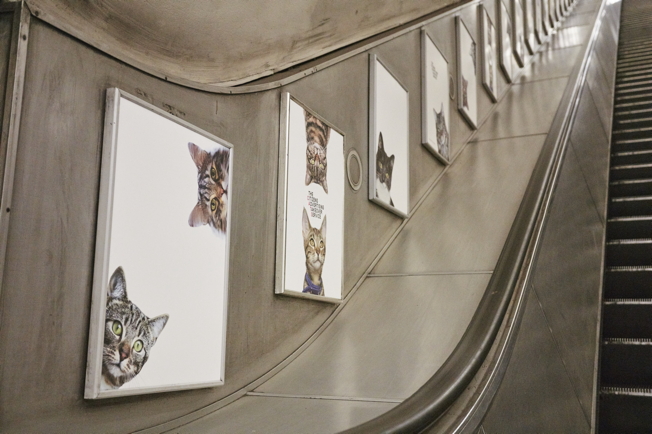 The Citizens Advertising Takeover Service replaced 68 adverts in Clapham Common tube station with pictures of cats.
Organisers say they hope the pictures will help people think differently about the world around them.
Credit: CatsnotAds.org

Take Just Do It ­­– Nike’s globally known campaign tagline. It’s been going strong for nearly 30 years and is still as relevant today. Why is it so successful? It’s simple, short and motivational. A three-word battle cry that resonates with sportspeople at any and all levels – from athletes to ordinary people. But, its memorability also relies in part on consumers seeing or hearing it nearly every day, repeated over and over with the Nike swoosh burned into the back of our minds.

Say it again for the people at the back!

How many times have you seen Nigel Farage standing behind the bar of an English pub, pulling a pint and then chugging it before smiling at the camera? Trite and trivial, but the more he repeated his beer-swilling, the more people believed he was ‘one of us’. He told us over and over (and over again) that he’s a man of the people. He created a successful ‘us vs. them’ strategy by positioning Brits as victims of the elitist EU. And he’s made sure he never leaves our screens and minds despite resigning twice and never having won a seat as an MP. He’s undoubtedly the most powerful influencer in British politics who isn’t even in government or parliament. 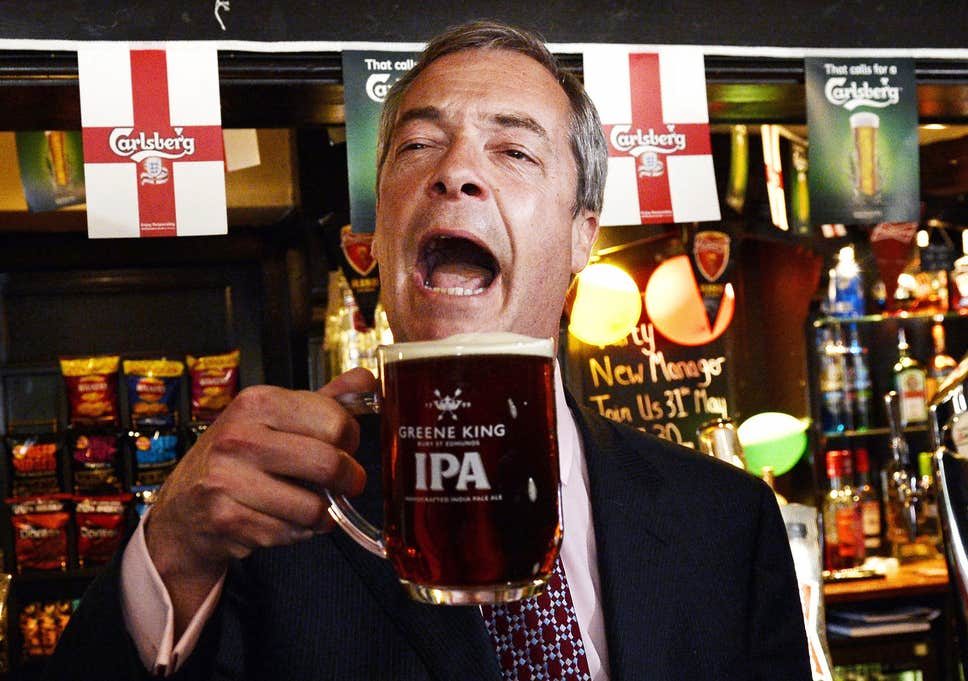 Across the Atlantic, Donald Trump told voters more times than we could count that he’d “Make America Great Again”, that the US was being swamped by “fake news” and that anyone or anything he disagreed with was “stupid”. Cognitive scientist and linguistics expert George Lakoff says the “constant repetition of Trump’s messages embeds them deeply into the brains of millions of people”, all thanks to circuits in our brain activated by repeated words until they become permanent patterns of thinking.

In politics, repeated words, phrases and behaviours are an easy way for politicians to sell their versions of reality. Are Farage and Trump so skilled at this because they’re businessmen at heart and know what it takes to create a successful brand? Before UKIP, Farage was a city slicker and Trump famously created a business from a measly $1m loan from his Dad. Their success in politics may be a simple reflection of their businessmen personas.

Is three the magic number? Sadly, it’s not that clear-cut. One of the leading theories on repetition is the two-factor model created in the 1970s by psychology Professor Daniel Berlyne. Berlyne argued that the effect of repetition can be broken into two phases – ‘wear-in’ and ‘wear-out’. During ‘wear-in’, when consumers first come into contact with a brand, repetition is vital in building familiarity and trust. But as time passes, too much repetition and you might hit the ‘wear-out’ phase or consumer fatigue – remember the operatic GoCompare? (and wish you could forget it?).

However, this 50-year-old theory doesn’t account for the nuances of today’s marketing and advertising landscape. Now, thanks to the vast expanse of the internet and the multitude of content channels at our disposal, we can repeat our core messages without necessarily causing consumer fatigue – they simply need recovery time before the next bout. Better still, if you’re creative and subtle – by rephrasing, redesigning and reworking how you present your key assets – consumers won’t even notice.

Today, we’re bombarded with so many messages in every facet of our lives. This means brands, politicians and advertisers have to be incredibly focused in what they’re saying if they want to have any hope of their message landing. Repetition is a simple reflection of that – to increase the chance of being heard, they have to repeat that focused message again and again.

So, if Trump has harnessed the power of repetition so effectively, maybe we shouldn’t turn our noses up at some of his idiosyncratic linguistic techniques. Either way, our next project is going to be so bigly that it’s going to Make Branding Great Again.

How can low-cost translate into high engagement?