"When your values are clear to you, making decisions becomes easier" Roy E. Disney
Roy E. Disney, the nephew of Walt himself, earned a reputation among the people he worked with as a fierce protector of Disney traditions. He unseated Walt's son-in-law, Ron Miller, as Chief Executive in a management cull that's since been credited with rediscovering the magic of the business his uncle and father so lovingly built.

Clearly, he wasn't a man to be trifled with.

He also isn't the only charismatic businessman to have realised the importance of strong company values. Having left Starbucks in 2000, Howard Schultz returned in 2008 to find the company had lost its mojo. In his first year back at the helm, Starbucks closed 600 stores and cut 6,700 jobs; a painful but necessary exercise, vindicated by relentless growth from the following year onwards. When asked about how he helped the company rediscover its ability to grow, Schultz simply pointed out that, "values are not luxuries for prosperous times. They are necessities in all times."

Schultz and Disney are just two of the many who see values as necessities. It's why we've spent some time reviewing the values of each FTSE100 company. 97 of the 100 profile their values on their websites ’ presumably as a signal to investors and potential employees that they understand how important it is for a company to follow a set of guiding principles. What's striking about them is how similar they are to each other. Nearly two thirds (63 out of 100) have at least one of the five most commonly-used values. This suggests a staggering lack of imagination, which is only compounded when you see what those five values are:

1. Integrity (31 of the FTSE100)
If anything, it should be a cause of concern rather than a badge of pride that so many companies feel the need to include this as a guiding principle for how to do business. What's the alternative?

2. Respect (22 of the FTSE100)
Another value that seems to have been chosen with the aim of being unobjectionable. The problem is that unobjectionable values don't help people in businesses make better decisions ’ unless they are foolish enough to think that behaving disrespectfully and without integrity might otherwise be acceptable in a work environment.

3. Customer-centricity (22 of the FTSE100)
Customer-centricity seems to be the go-to value for businesses that aim to create shareholder value, whilst acknowledging that employees are their most valuable asset. It's difficult to see any evidence of these companies prioritising the happiness of their customers above the wellbeing of their employees or the satisfaction of their capital providers.

4. Innovation (17 of the FTSE 100)
’The preferred value of CEOs who were told they should 'innovate or die!'... and decided against death.

5. Excellence (13 of the FTSE100)
Who wouldn't want their business to be excellent? It's another value that seems designed to be unambiguously positive. What useful direction can this possibly give to an employee that would help them do their job better?

Now this is all very well and good, but does it even matter?

In a nutshell, it might. We compared the share price performance of the 25 most 'generic' FTSE100 companies (based on their values) to the share price performance of the 25 companies with the least generic set of values. Taking the data with a tiny pinch of salt - given the small number of companies in each set - the chart below demonstrates that over one year, two years, three years and five years the 25 least generic companies (in white) have consistently outperformed the 25 most generic companies. A little touch of Disney magic, it seems, can go a long way. 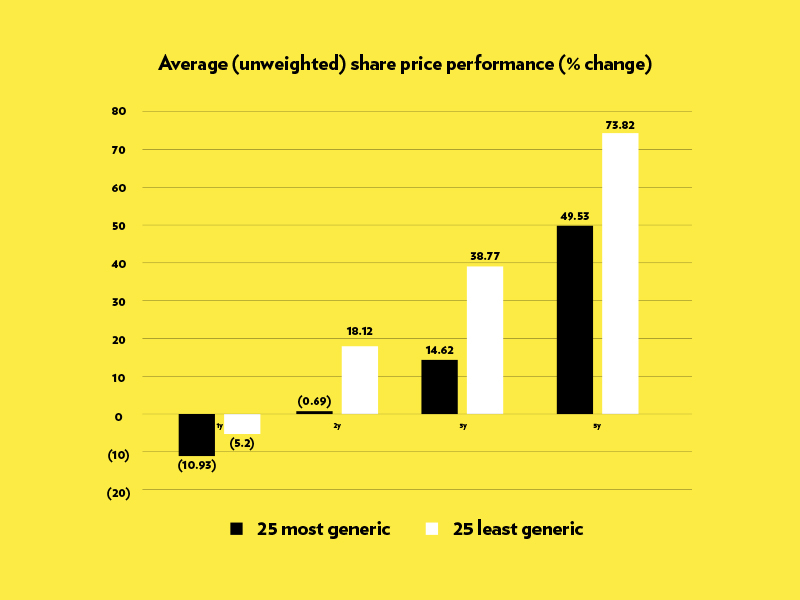 Besides the data above, there are at least two reasons to believe that companies with more imaginative, differentiated values would outperform equivalent companies with a more generic set of values. First of all, a unique set of values suggests that a company's leadership has made a conscious effort to identify a clear, meaningful point of difference - what we like to call a 'Clear Defendable Territory' ’ and is confident in its ability to defend it. Secondly, these distinct values demonstrate a culture of conviction and a willingness to make difficult decisions. Good values are supposed to involve some form of meaningful sacrifice.

So what now?
Companies with identikit values take the easy way out. They fall in with the prevailing wisdom because it feels safe to go with the crowd. Most alarmingly, they flaunt their timidity and lack of imagination for everybody to see, presumably in the hope that nobody will notice or care about their lack of identity. I'd personally be very worried about investing my pension in a company with any of the values above. 'Integrity' and 'Excellence' and 'Respect' indicate a flawed approach to decision-making, suggest a culture of cynicism and a concerning lack of leadership and direction. You don't need to be Roy E. Disney or Howard Schultz to develop a clear and compelling set of values. Whether your business is a FTSE100 company or a fledgling start up, applying the following set of guiding principles can help you avoid developing meaningless identikit values:

1. Start with a clear vision of the future of your business
Your values will be most powerful when they help achieve your ambition for the future. They aren't supposed to be a shopping list of the qualities you believe you already have. So it's better to begin by understanding what you want your business to achieve, rather than trying to sum up what makes you successful today. The clearer your vision of the future, the easier it will be to tell whether your values will help deliver your promise.

2. Limit yourself to three values
It's amazing how many business leaders expect their colleagues to remember umpteen values, heaps of behaviours and myriad competencies’ as well as retaining all the information necessary to perform competently in their roles. It's unrealistic to expect people to remember more than three values’ even if those values alliterate (they always forget the fourth "I' or the fifth "C').

4. Apply the 'as opposed to' test
If your values are to become a helpful guide for decision-making, it's important to understand why using them would involve sacrifice. That's why it's helpful to list a positive quality that is opposed to each of the values you're considering. Let's take 'fun' as an example. This could point your business in a number of directions:

Example (a) really doesn't involve a choice at all ’ very few businesses would see 'boring' or 'tedious' as a positive quality. Examples (b), (c) and (d) provide far more direction ’ especially if, for example, your business involves the provision of financial services.

5. Ask the people you work with for their opinion
If everybody you speak to likes the list of values you've come up with, then you've probably produced an inoffensive set of words they feel comfortable ignoring. There are two signs that will give you confidence you're on the right track:

To finish on one final thought: values can be most effective when they're used to inspire rather than control people. That's why it's so important to give people at all levels a chance to interpret them for themselves. Of course, there's always a risk that people will misconstrue them or let you down. But there's also a significant upside: inviting people to interpret values on their own terms creates the possibility they will develop surprising, innovative approaches to carrying out their work. This proves values should be thoughtfully applied as well as carefully conceived.