"How does a business that's grown to be one of the world's iconic travel brands celebrate its 20th anniversary without chest beating?
Our concept - #bettercloser - amplifies how travellers feel about the impact of Eurostar on their lives, celebrating the cultural influences and quirks of behaviour that have been shared between the UK, France and Belgium. Whether it's Londoners now feeling awkward about ordering steak well done, or Parisians dressing more colourfully, Eurostar has helped accelerate all sorts of cultural change, making the three countries feel closer than ever.

We asked hundreds of travellers and employees what they thought was better about being closer to London, Paris and Brussels. These insights were brought to life by four illustrators: Jean Jullien, Toni Halonen, Eili-Kaija Kuusniemi and Adrian Johnson. They've all got unique and distinctive styles, and were chosen to celebrate the diversity of cultural influences and change. And that approach is at the core of our 20th anniversary campaign for Eurostar – it's all about sharing travellers' insights and avoiding heavy-handed corporate branding.

You'll see it during November in all three cities on posters, in the press and on taxis – as well as across social media. 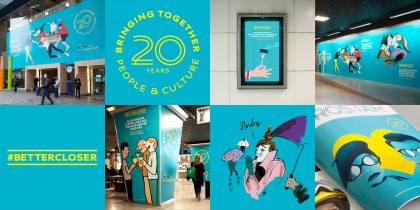