The morning of Friday 25th May can’t come soon enough. Oh, how I long to not wake up to find at least five emails demanding that I ‘opt in’ to X and to ‘click this link’ if I want to keep receiving useless information about Y. To say I’m over GDPR is an understatement. But here I am, writing a piece on it (with 50% more physical force being placed on my keyboard than would be considered normal).

My own personal perceptions aside, this is pretty serious stuff for brands. At least that’s what we’ve been led to believe. The spotlight has been burning brighter than ever on data privacy, control and consent over the last few weeks. Whilst GDPR touches on each of those areas, its core focus is on the latter; consent. More specifically, it’s on brands getting consent from their customers to be able to stay in touch with them. That includes regular email newsletters, blasts and general ‘as-and-when’ updates - all of which can play a key part in how brands will handle consumer data in the future, as well as how they’ll shape their marketing strategies.

It’s taken Google between 18 months and two years to lay their pathway to GDPR compliance, according to their CMO, Lorraine Twohill. Whilst my own conversations with marketers have revealed tales of nighttime reading lists the size of another bedside table. There’s a lot to take in, and with fines of €20 million or 4% of a company’s global annual income - whichever is highest - for failure to comply, I get that the stakes are high.

But, that aside, it’s the repetition that’s ground me down. Reading the same email over and over again, the majority of which have come from brands and other content pushers I’m convinced I’ve never subscribed to - there’s an irony in there somewhere - is beyond boring. As a consultant that believes in brands forging more emotional, lasting connections with their customers, I’m disappointed. Surely there has to be a way to make this functional ask sound less formulaic and more captivating?

I see GDPR as an opportunity more than a challenge. It’s a compulsory opening for engagement with customers - a chance to stand out and remind people why your brand matters.

People will only continue to opt in to communications if they genuinely care about what you do for them and how you make them feel - if there’s an emotional connection. The writing may already be on the wall - emotional connections with brands are created, established and reinforced over time, never just through a single email, but that doesn’t mean you shouldn’t at least remind people of why they were interested in what you have to say in the first place.

Money Supermarket have done exactly that, opting for a softer approach to encourage resubscription. They’re in the business of saving people money, so it only makes sense for them to remind people of that - even if the email they’re sending is about personal data protection at heart. 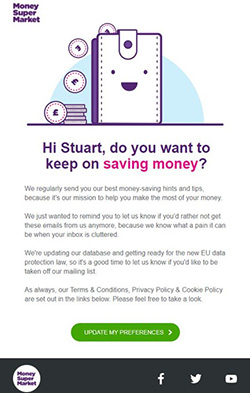 The answer to the question they’re posing has to be yes. Who wouldn’t want to save money? There’s a clear incentive and reward for the recipient to re-subscribe. It’s a win-win for consumer and brand.

Likewise, fast fashion retailer, Missguided, have proven that although the subject may be a little *yawn* it doesn’t have to stray off brand. 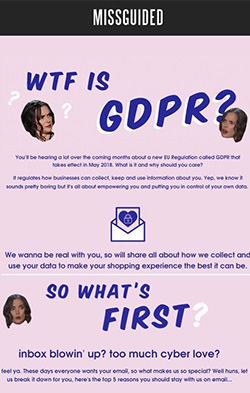 Over a series of emails, not just a random one-off, they tell it how it is in a style that’s unmistakably theirs. Insightful, relatable and with bags of attitude.

But it’s not just the occasional big name brand that’s taking advantage. The Waterside, a Young’s pub located in Fulham, have also bucked the boring trend. 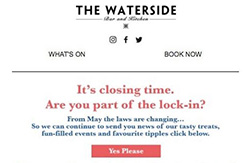 A simple question, but one that’s grounded in the category, is a far more effective way of getting people’s attention than simply asking - or as with certain brands, telling - consumers to take action. It’s more conversational, natural and down-to-earth - and as a result it’s more relatable.

All three examples may not be groundbreaking, but that’s exactly my point - they’re still worthwhile communications that aim to provoke thought and tempt action, exactly as they should. As far as the many GDPR emails I’ve seen, they’re best practice. So, what can we learn from them?

As with anything brand-related, it’s easy to over complicate the simple - GDPR is no different, even if it does feel like a stress-fuelled burden. So, don’t let jargon or overly technical language bog down your communications. Instead, simply stick to your guns and what you know best: your brand, and the difference it makes. Even if GDPR is compulsory, it’s still an opportunity worth making the most of.

*goes back to deleting emails from inbox*

With that all said, stay in the loop with us and in return we’ll give you plenty of industry insight and invitations to events. (Nothing wrong with a good old-fashioned bribe, right?)