"We couldn't be happier to announce that Byron Hamburgers has now donated 500,000 meals with One Feeds Two. To put that into some context, that's enough meals to get 2,631 children through school for a year, feed the population of Edinburgh or satisfy a fully seated Wembley Stadium five and a half times over. 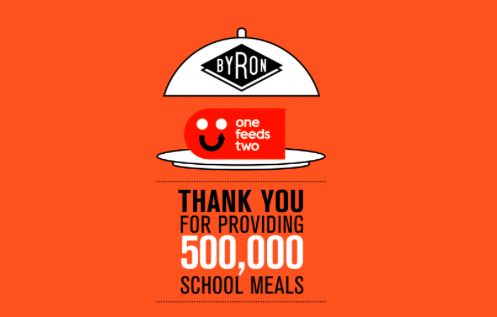 We helped relaunch One Feeds Two in 2014, and a year later the charity partnered with Byron. Since then the burger giant has dedicated each of its monthly specials to providing school lunches in some of the world's poorest countries. So every time you've tucked into a Cluckersauras Rex, a Cheesemas or even a Calvin Haggis, you've also paid for a child in poverty to eat too.

Is anyone else suddenly peckish?"